“Adelina Ivan, an artist who captured the restructuring of time against the critical eye of a fragmented present.”

Series of repetitive gestures, a chronology that flows in folds and resistance spaces where a substitute for the self is searching for its status are elements delineating a conceptual universe where the mystery of things is protected. 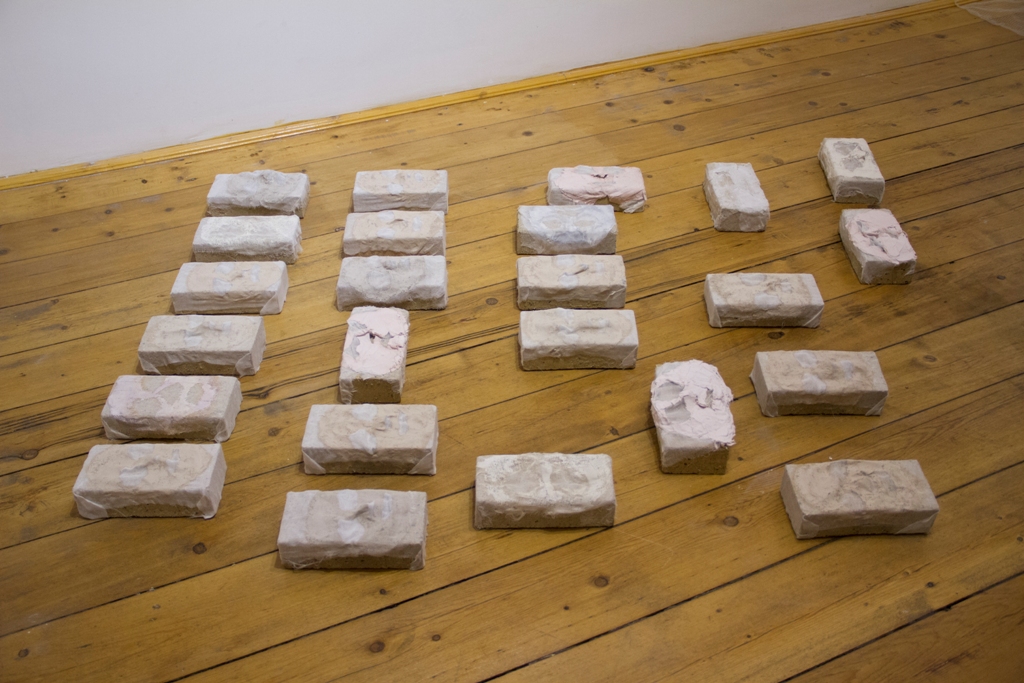 “Existence refers to the time, space, and the invariable state of the object we see in front of us.” 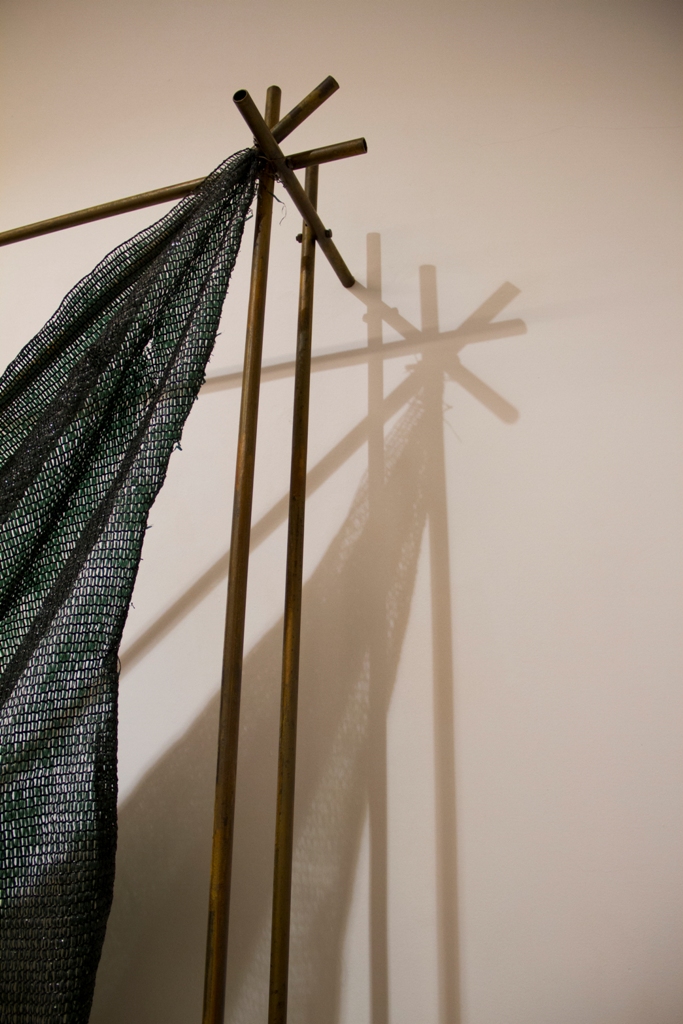 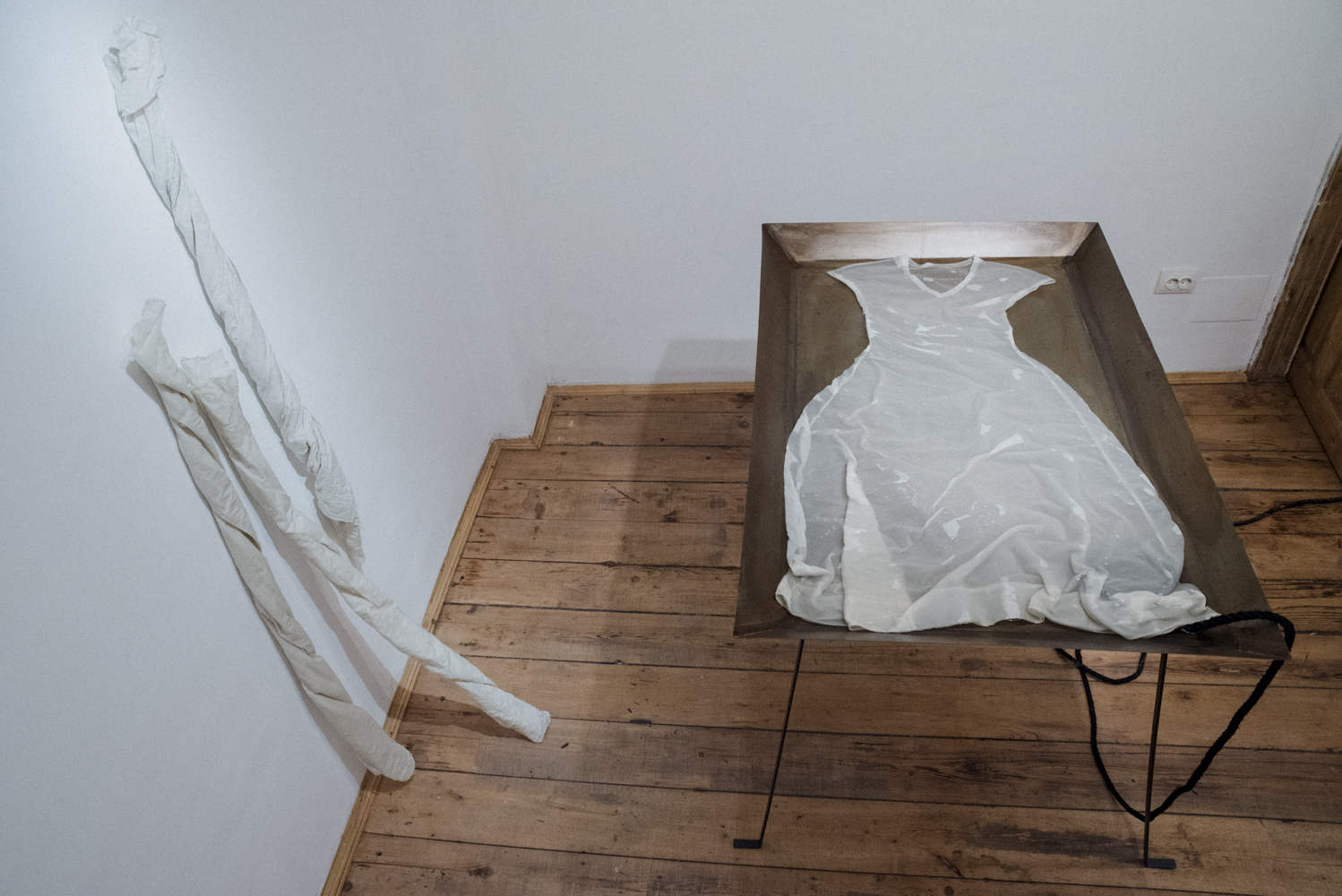 Series of repetitive gestures, a chronology that flows in folds and resistance spaces where a substitute for the self is searching for its status are elements delineating a conceptual universe where the mystery of things is protected.
The exhibition entitled To restore or how the stable structures need frail gestures seeks that very rearranging of those states of mind and things that reveal the conceptual trajectory of Adelina Ivan, an artist who captured the restructuring of time against the critical eye of a fragmented present. In the summer of 2017, Adelina Ivan attends the International Summer Academy in Salzburg and uses this time to get better acquainted with the medium of art-installation by introducing partitions, successive layers of materials, from which three-dimensional objects emerge, communicating directly and even complementing the spaces in which they are set. The obsession for the body and for the personal past, so noticeable in previous projects, such as the artworks Atena adjusting her sandal, exhibited in 2016 at ODD in Bucharest or the suite of art-objects and video-works from the exhibition Frugalitas Severitas Fidelis. which took place at tranzit.ro/Bucharest also in 2016, was replaced by experiments approaching the building of the relations between objects and space. The artist states that these explorations resulted in „a sort of mutual transformation in which the object is contained by space, and the space is swallowed by the object, determining an organism built out of pieces with an innate fragility, ready to fall apart only to recompose themselves afterwards. The continuous transformation process of the clothing object, of the fabric, the preservation of its memory, the interaction between the different materials, the space and time dynamics are transposed in the spatial installations stemming from this perspective”. In a text published in 1970, Existence Beyond Condition, the Japanese sculptor Suga Kishio talks about the difference between existence and presence regarding artistic objects; the contemporary artist doesn’t have the capacity to preserve the objects, especially that the photographic documentation substitutes in many cases the presence of the objects. As the connection to the finite object fades, the state of presence is being replaced by the object’s state of existence. Existence refers to the time, space, and the invariable state of the object we see in front of us. For many artists, the production of the object’s state of presence is secondary and is connected with the awareness of producing a thing. We can also refer to an obvious state of absence, as opposed to presence, and in order to make the transition from absence to presence it is necessary for the key-element to be visualized. If the state of presence constitutes the standpoint of an object prepared for visualization, the state of absence must be considered responsible for creating a non-visualized object; the state of presence imposes the transition from a fictional world to an actual world. The state of presence represents more than the simple idea of being present. Even if for assuring the state of presence of an artefact the human intervention is needed, a multitude of factors, forms of manipulation and actions determines the present condition of the object. In order to substitute the body, which the artist perceives it to be more of a lost body rather than an absent one, Adelina Ivan emphasized the contact between geometry and space, seen as a secret code of communication and understanding. Therefore, the two-dimensional objects are unfolded in space and recreated – the side of a square is detached, unfurled towards the
exterior, after which it is suspended above the new shape. Or the cosmetic masks set unto fabrics, collected by the artist during the last few months, are laid onto checker bricks spread over within a corner, making one meditate on the antagonism between intimate and social spaces, but also on the reproducibility of identity. On the other hand, force and frailty are put into balance, exposure and protection, transiency and permanence, illustrating the idea of rhythm and repetitive movement, but also the time that lengthens and reflects itself into gestures and materials. 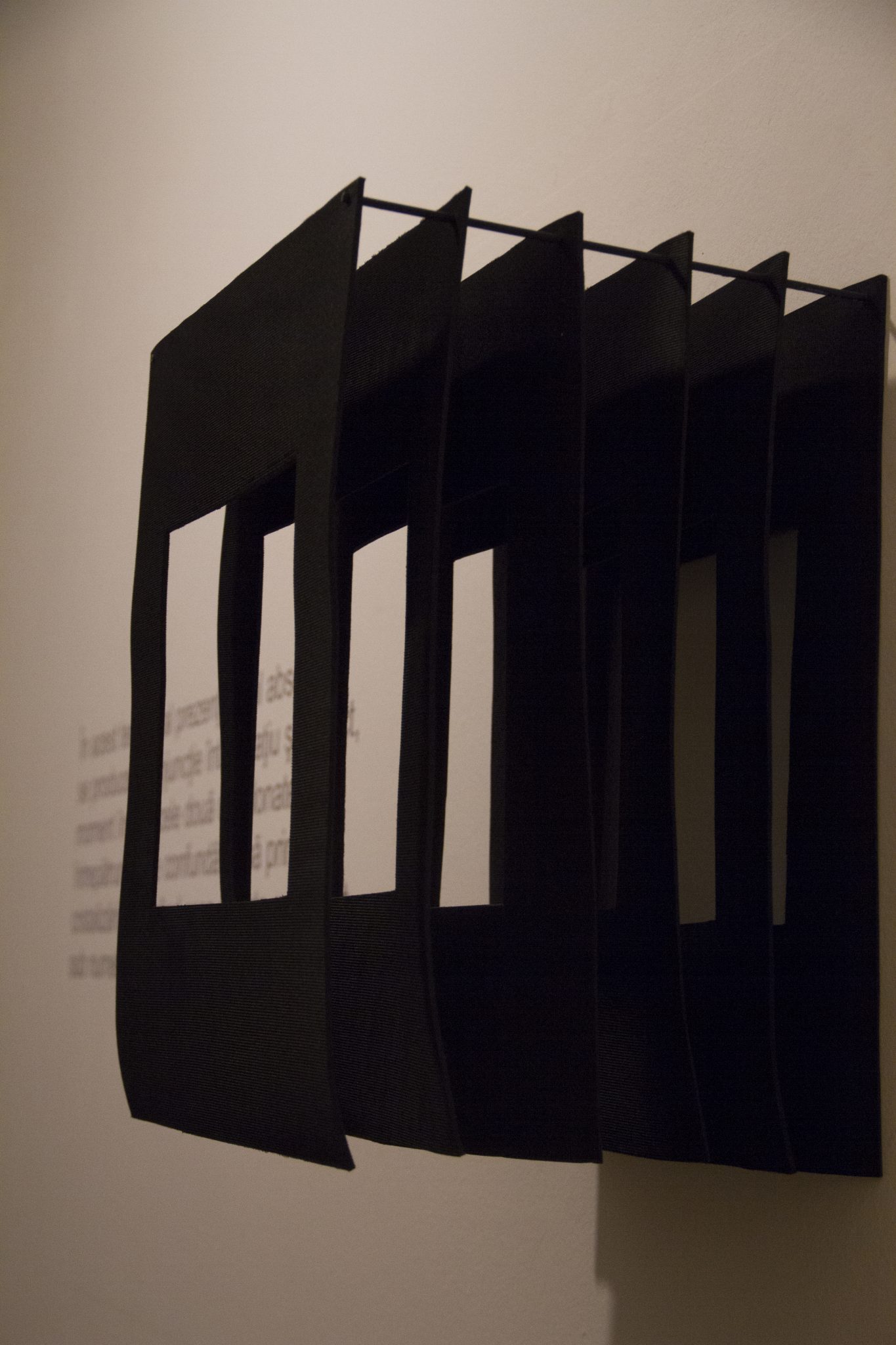 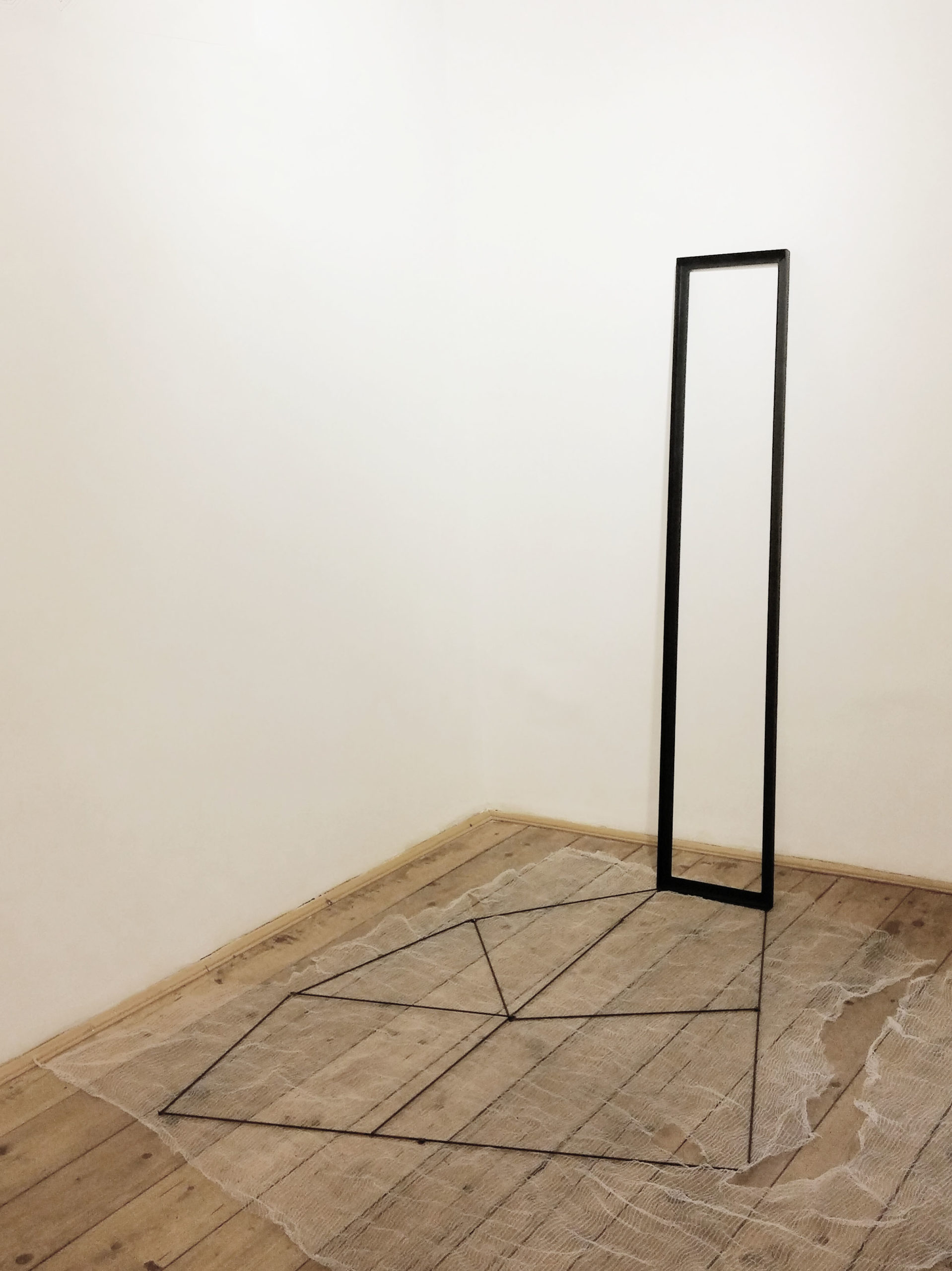 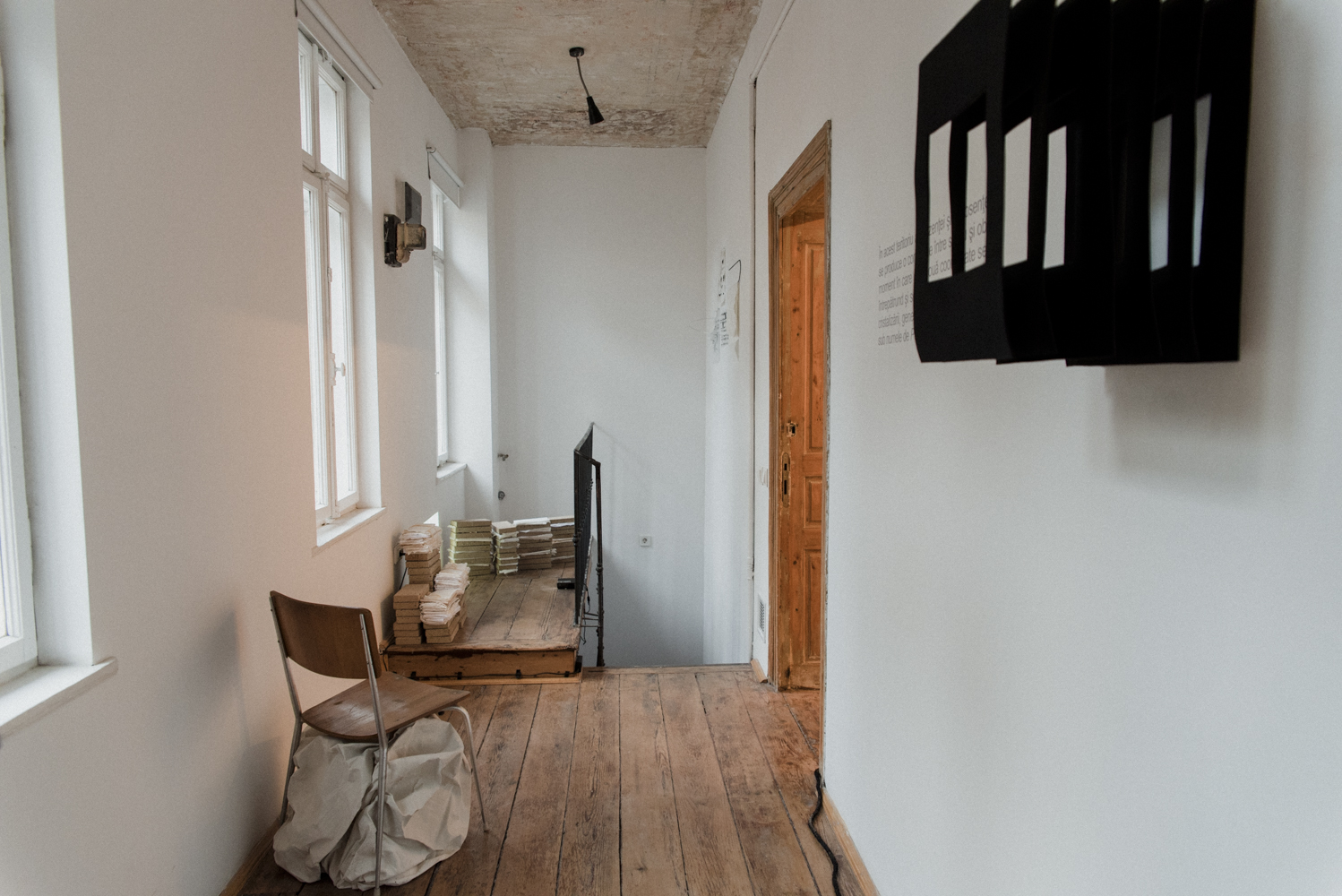 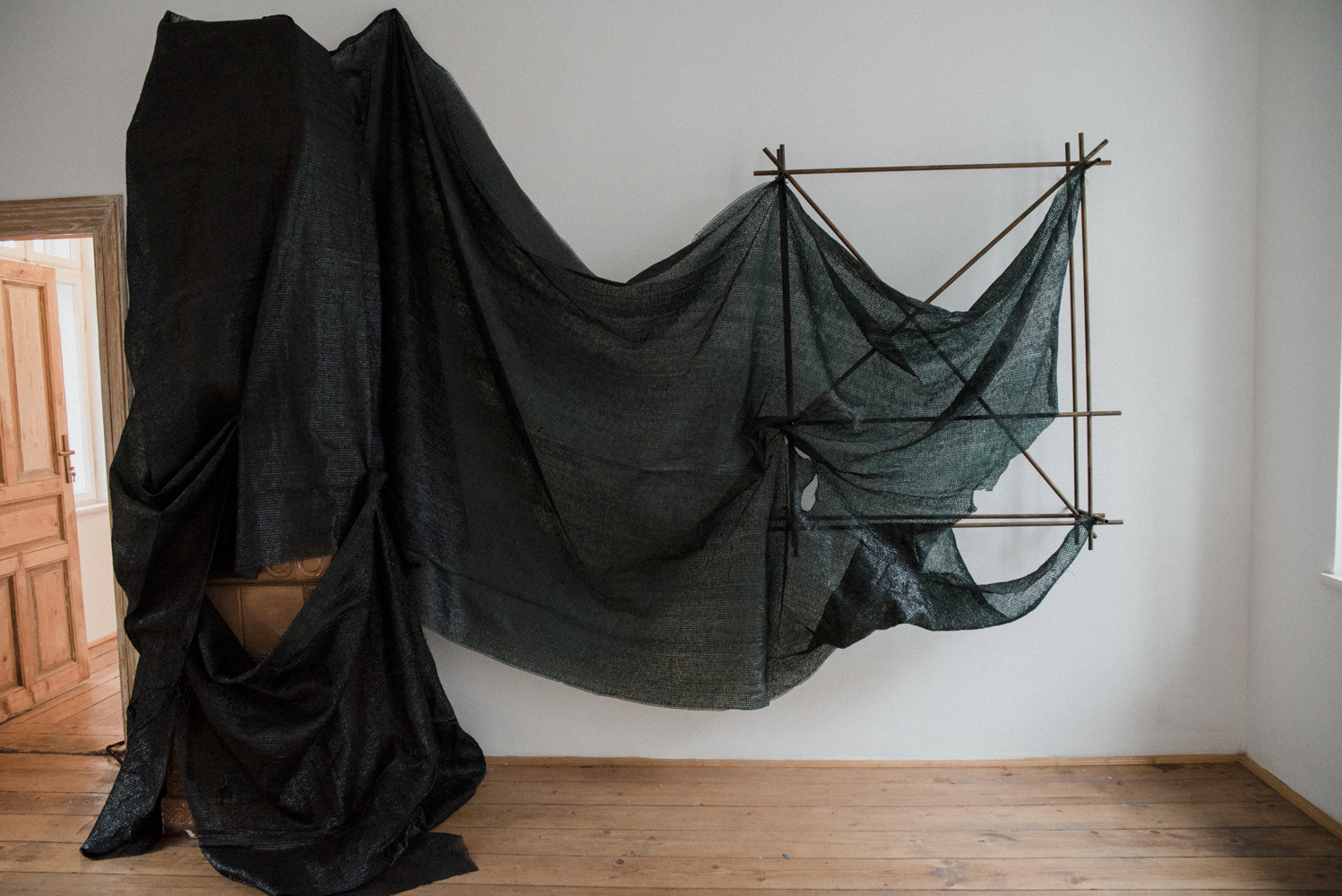 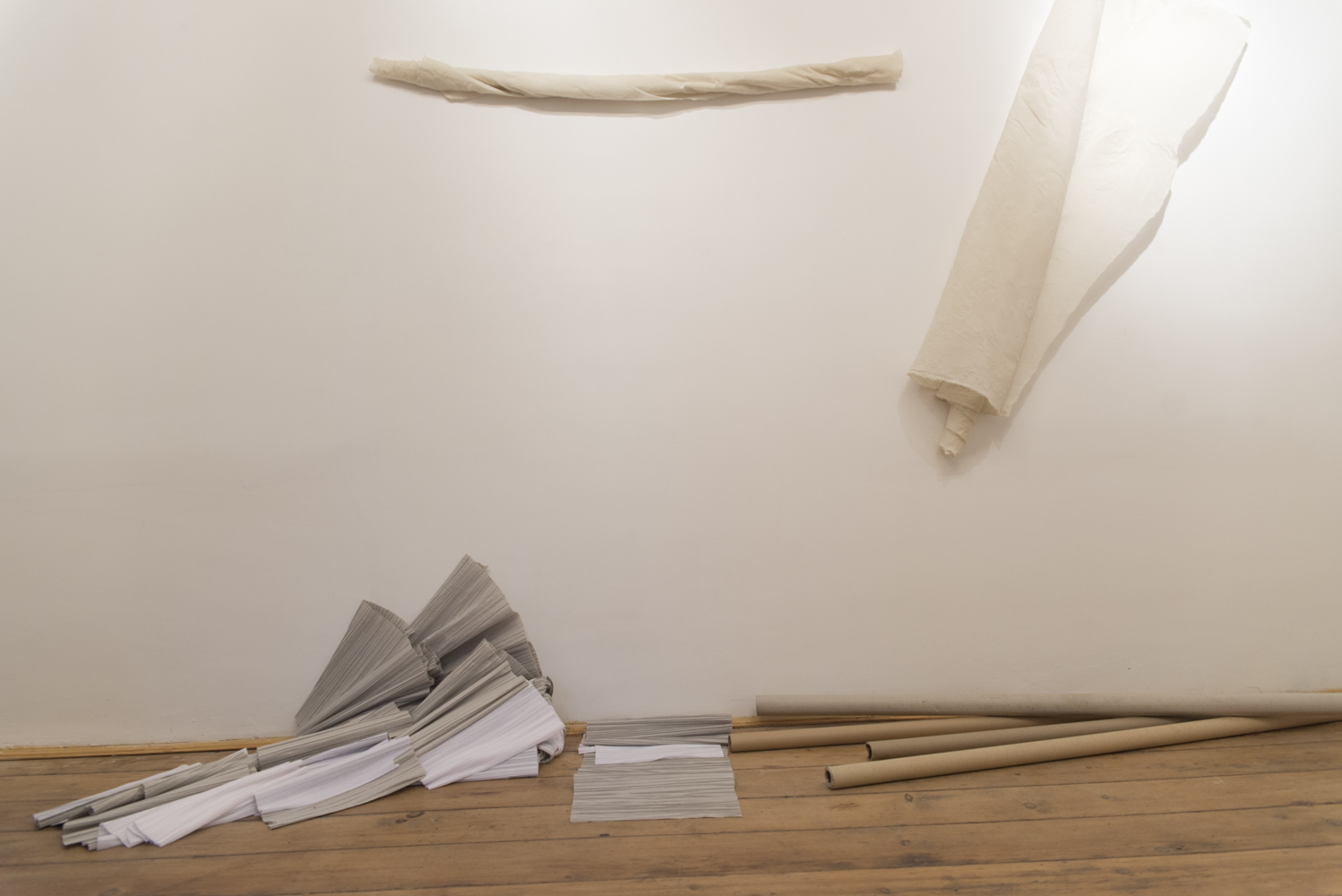 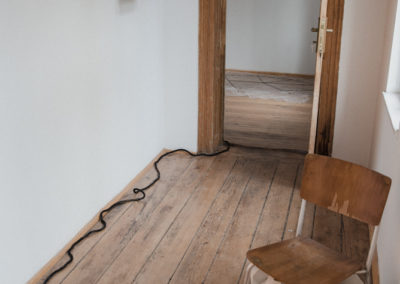 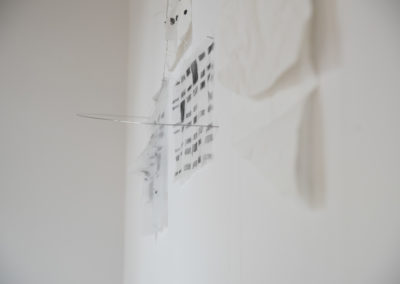 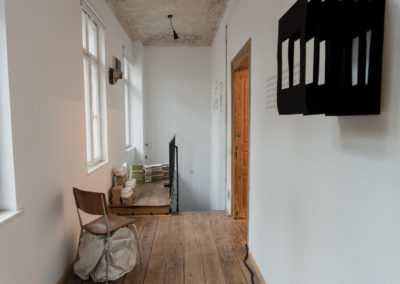 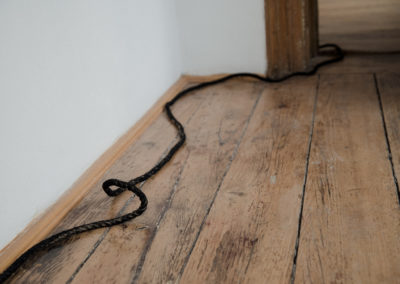 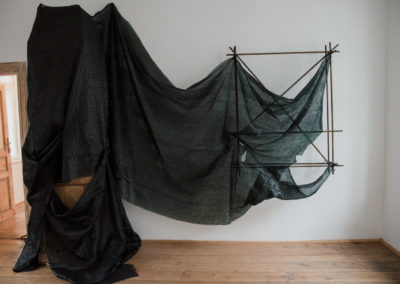 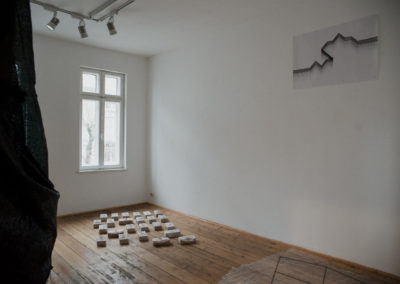 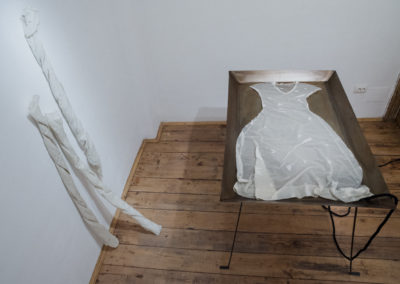 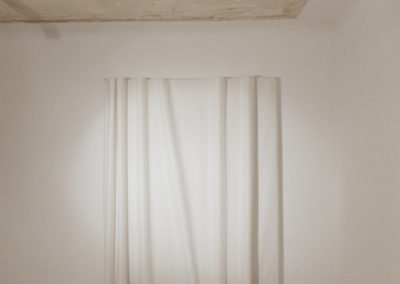 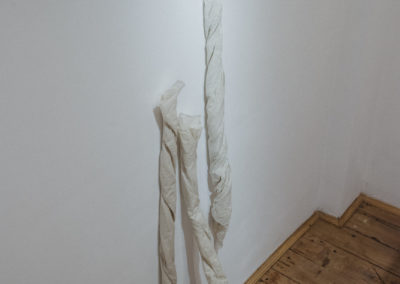 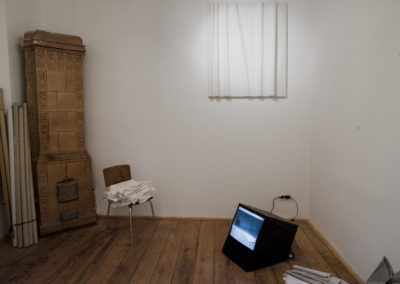 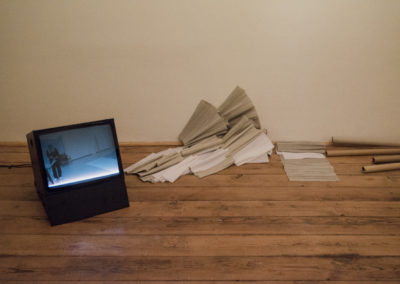 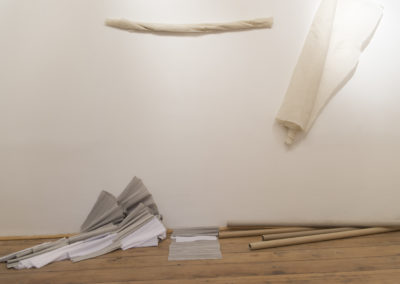 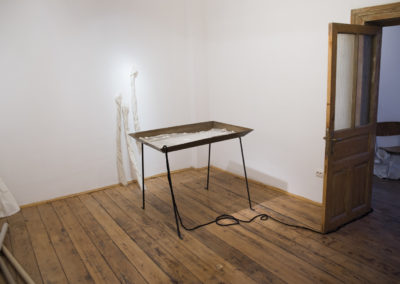 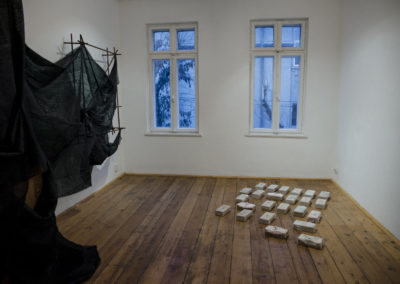 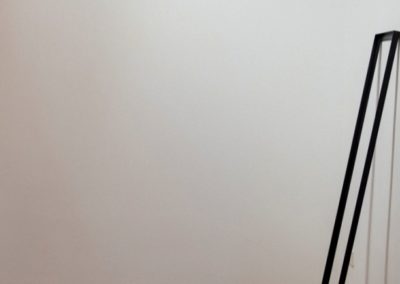 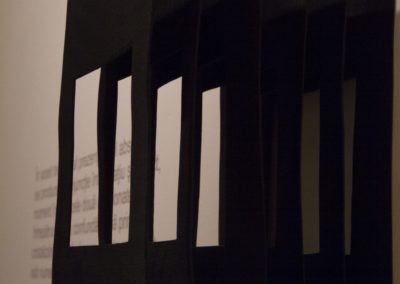 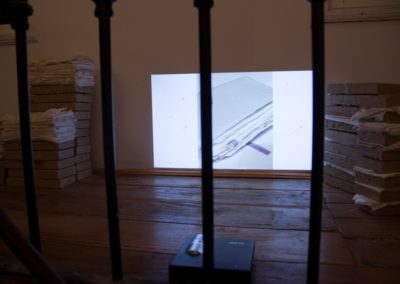 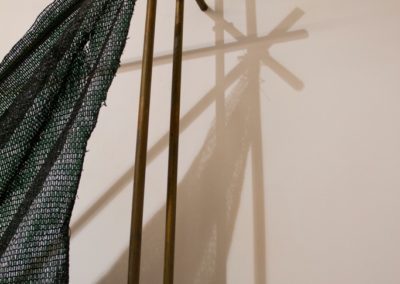 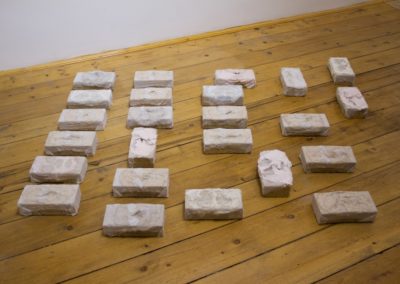 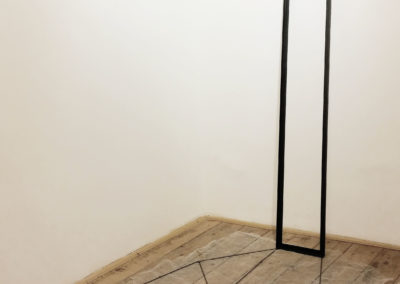