Behold a new technology, the NFT, aspiring to the same goals of digital democratization and freedom. NFT Art or Crypto art, is developing freely and is distributed following the crypto-coin model. Each work that is minted on one of the profile-platforms is linked into the blockchain, digitally-guaranteed by an automatically generated unique code, free from the control of any bank or financial consortium. The machine-given freedom is not risk-free. Should one lose the unique access code to the virtual wallet, no human or banking authority is able to intervene to stop the investment dissolution in a virtual void (see the legend of the eccentric crypto-millionaire Mircea Popescu, found dead on a beach on Costa Rica, his fortune all but lost).

Shortly after its launch, the NFT is still creating a lot of confusion. What can a digital collage, a tweet, the original code of www, have in common with basketball plays or an animated meme of the Nyan Cat? What is the difference between selling postcards with Michelangelo’s works and launching an NFT copy, following the Uffizi gallery model? Do we select an open platform, where anyone can upload anything, or an elitist one such as SuperRare? In Romania, church goers are told that only through buying an NFT are they able to have a sneak peek into the altar of the People’s Salvation Cathedral, at the holy icon of the Platytera Virgin Mary. 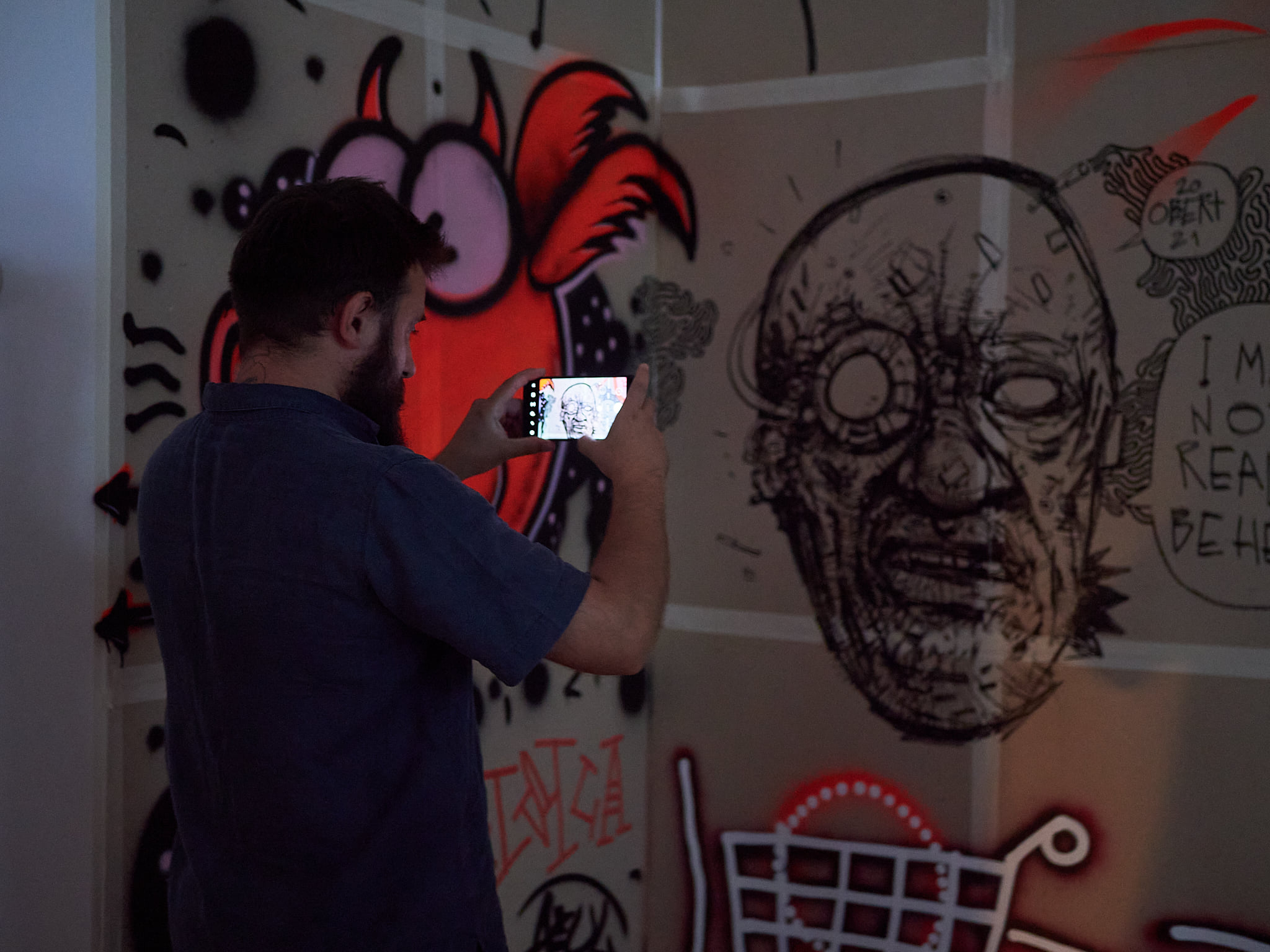 “In our opinion, just as the internet was close to being overtaken by the dotcom neoliberalism, and just as social media underwent its Social Dilemma, the Crypto danger for art is to be limited to recirculating influencer brands, to the simple re-gurgitation of name value-spreading, forgetting to make art. Outlining an aesthetic depends on how artists respond to relaunching a Tactical Media manifest, occupying the medium with their own messages” 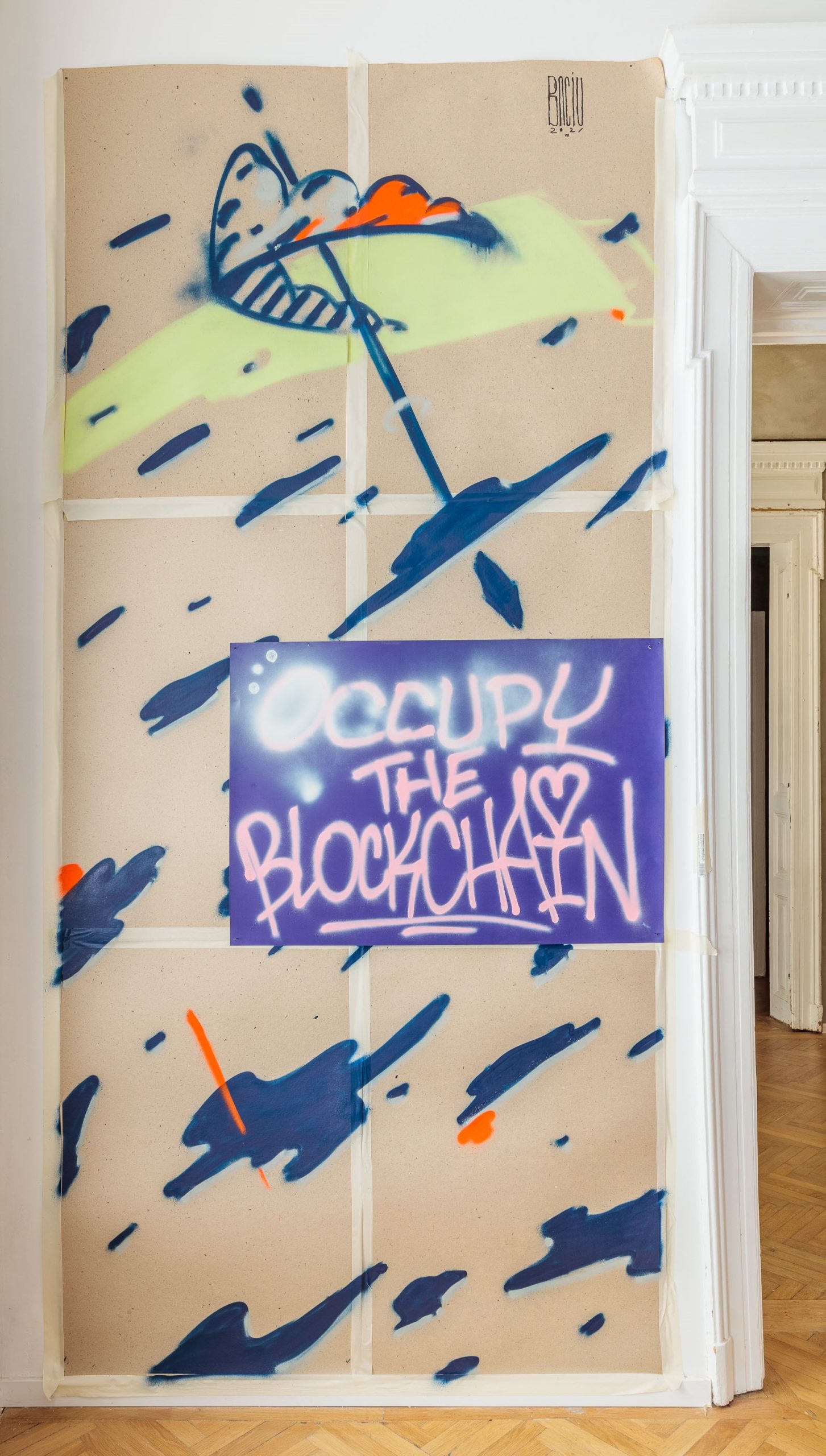 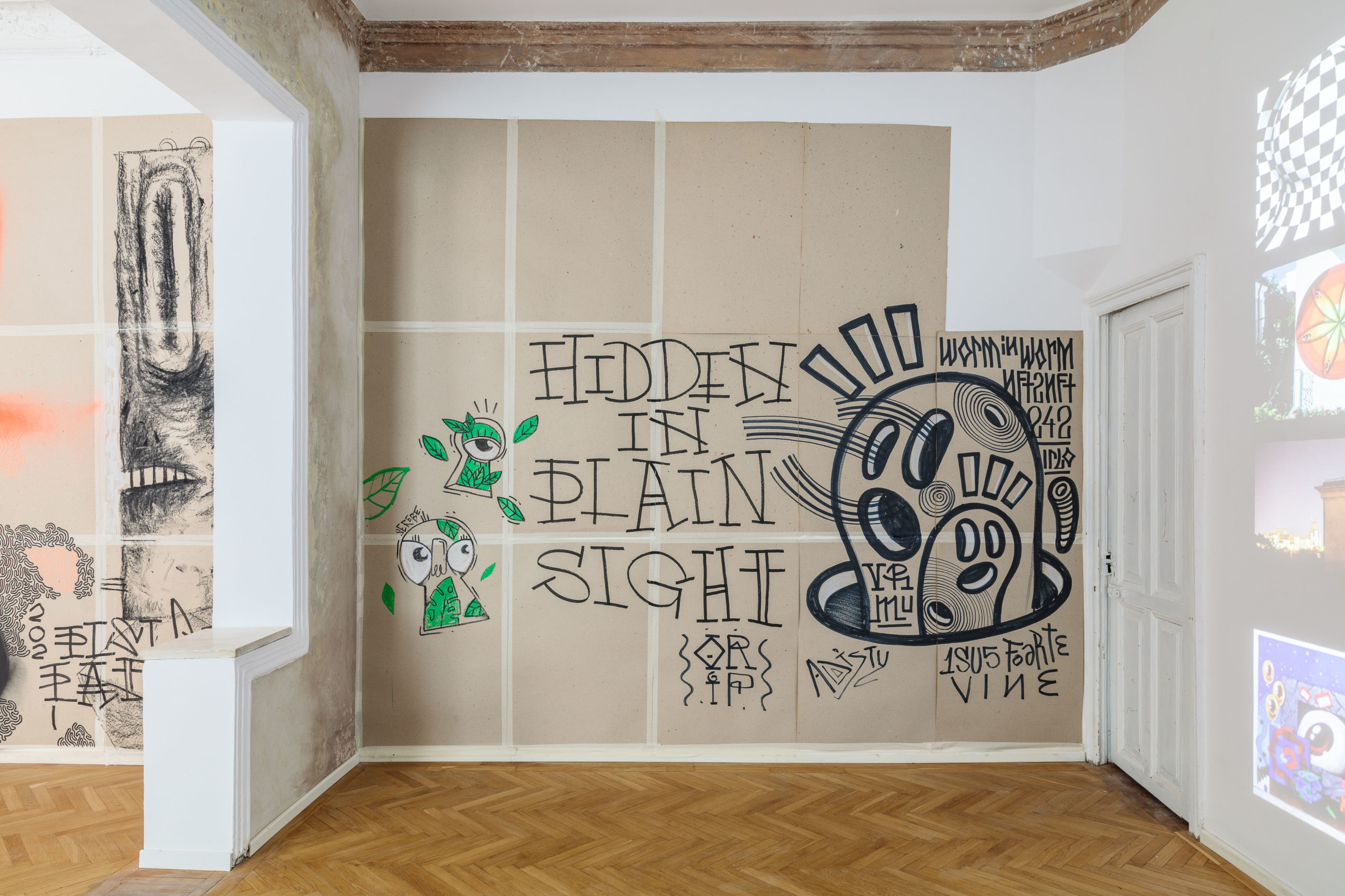 These mysterious personas, hidden in plain sight even as their names are written all over city-walls, undergo a hybrid practice, between street art and social activism, contemporary dance, illustration, comics, digital graphics,  installation, painting (with punk, pop, surrealist, fantasy, sf tattoo-art influences). There are the ones that founded the New Mural Order (Irlo, Obie Platon, Kero Zen), have set records for the largest murals in the country, or the largest wall on Arthur Verona Street (Irlo, Alex Baciu), have collaborated with famous musicians (Obie Platon and Roger Waters), have launched experimental spaces, catalogues, cultural projects and intermedia festivals (Tudor Chiliman and the Waha Festival, Lucian Sandu Milea and Carol 53, Pisica Pătrată and his famous art-books, Robert OBERT and Profeția Urbană [The Urban Prophecy, en.]).

This group of public space reformists have created street-art inspired works in the context of an original digital art collection. In order to express their disapproval towards the NFT invasion of mere copies of museum pieces, the artists destroyed any physical trace of the works. Especially relevant to this point is the literal cut-through of Aeul’s famous street art pig icon. The purpose of the collection is to infuse the NFT platforms with a critical discourse regarding various technological, political, biological control strategies. To this end, we are debating on how technology impacts on various degrees of individual freedom which is already conditioned by a mediatic society that facilitates the dissolution of the self and Authenticity. 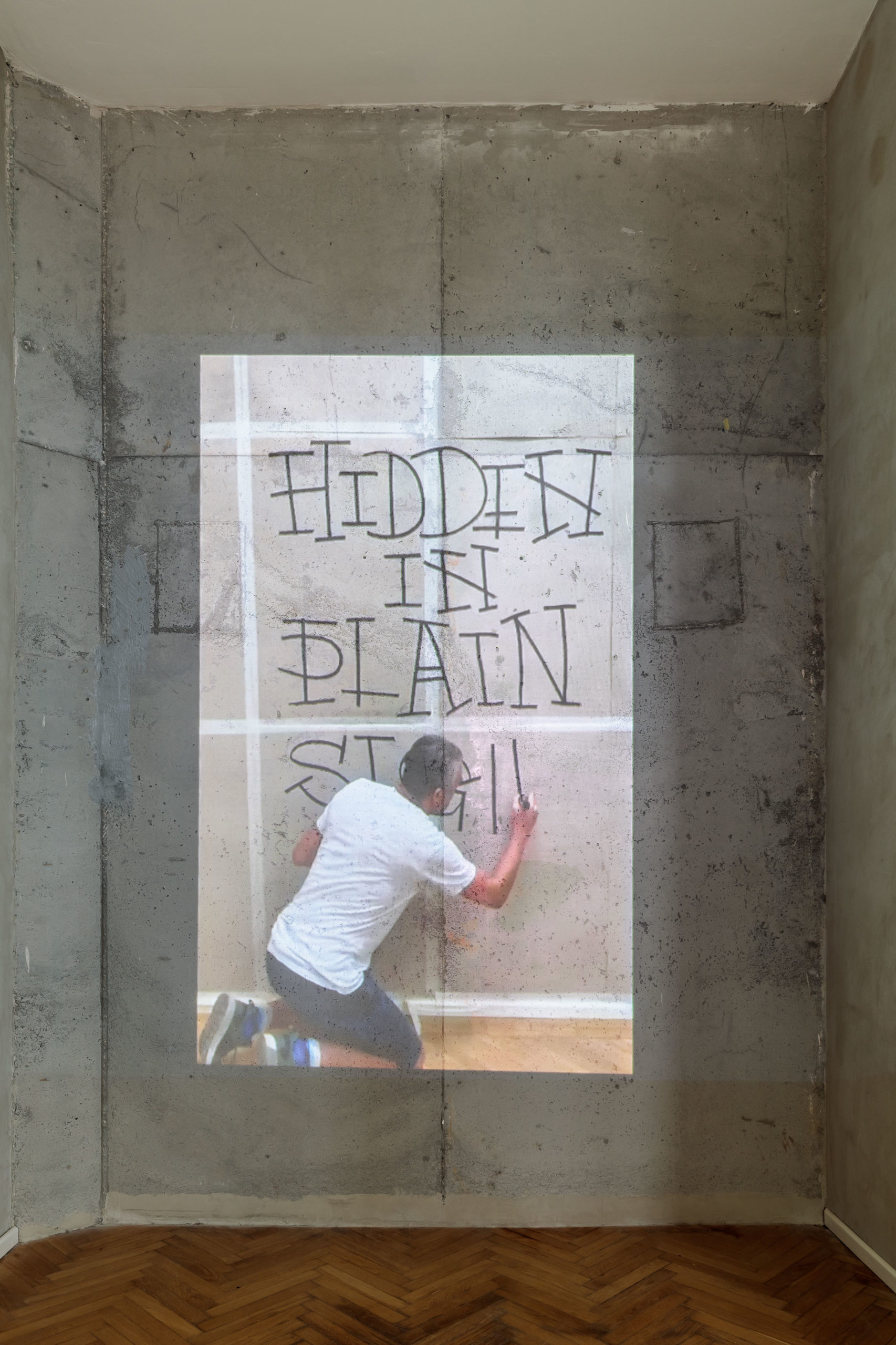 The street-artists’ special guest is the Kinema Ikon group, the initiators of digital media art in Romania, with an installation which recontextualizes the NFT collection. The event featured a special live sound performance by dyslex. 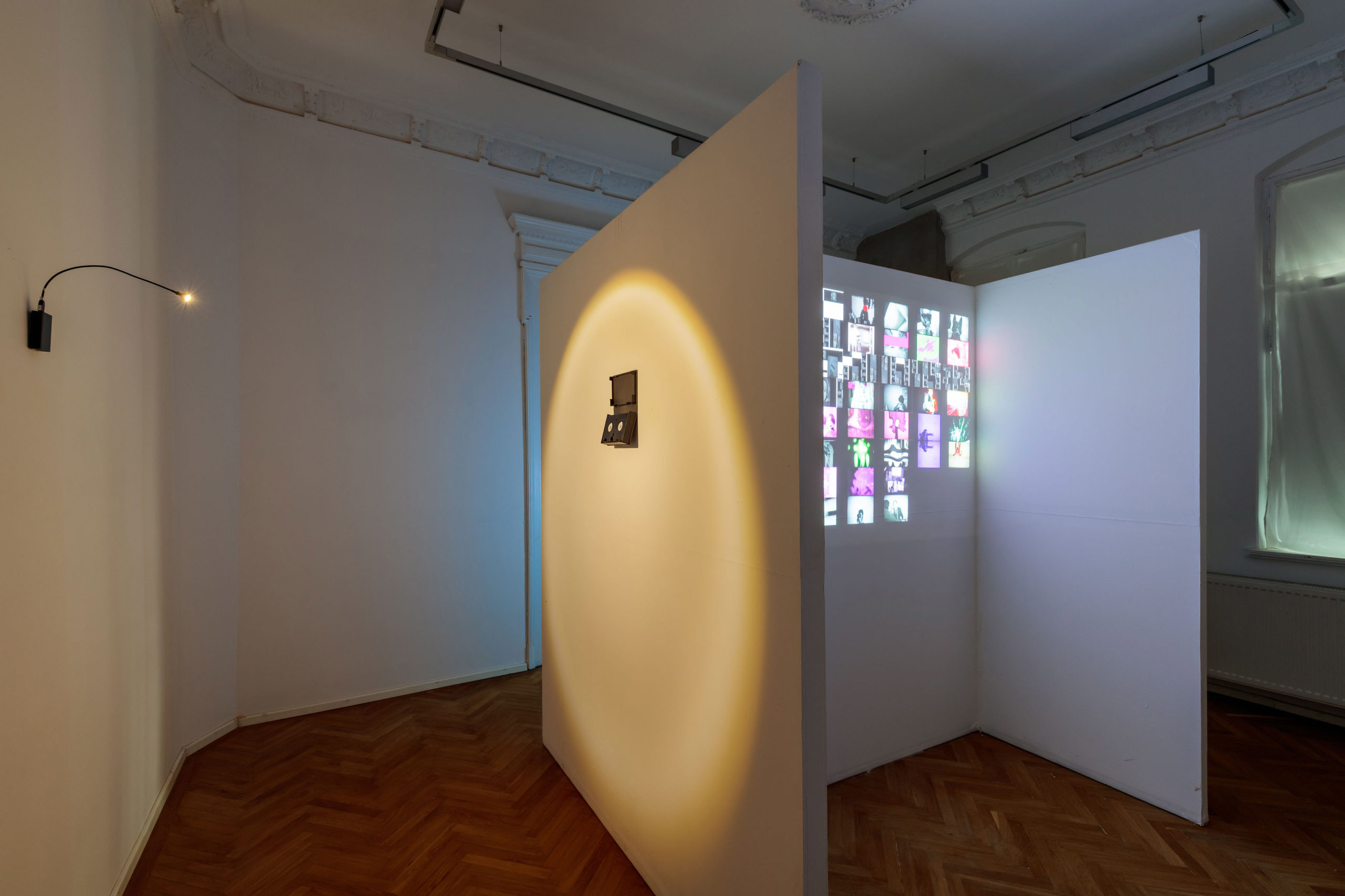 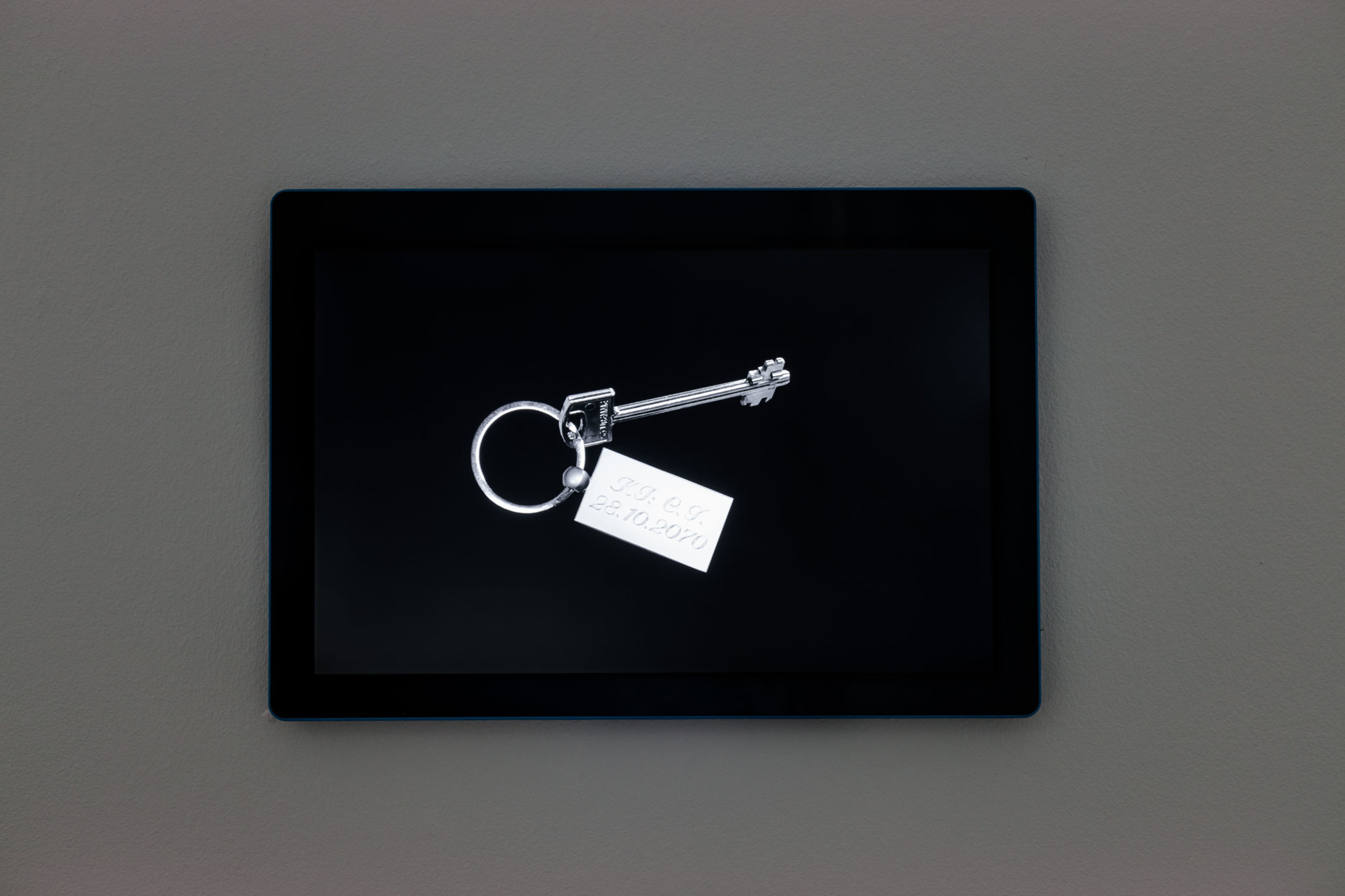 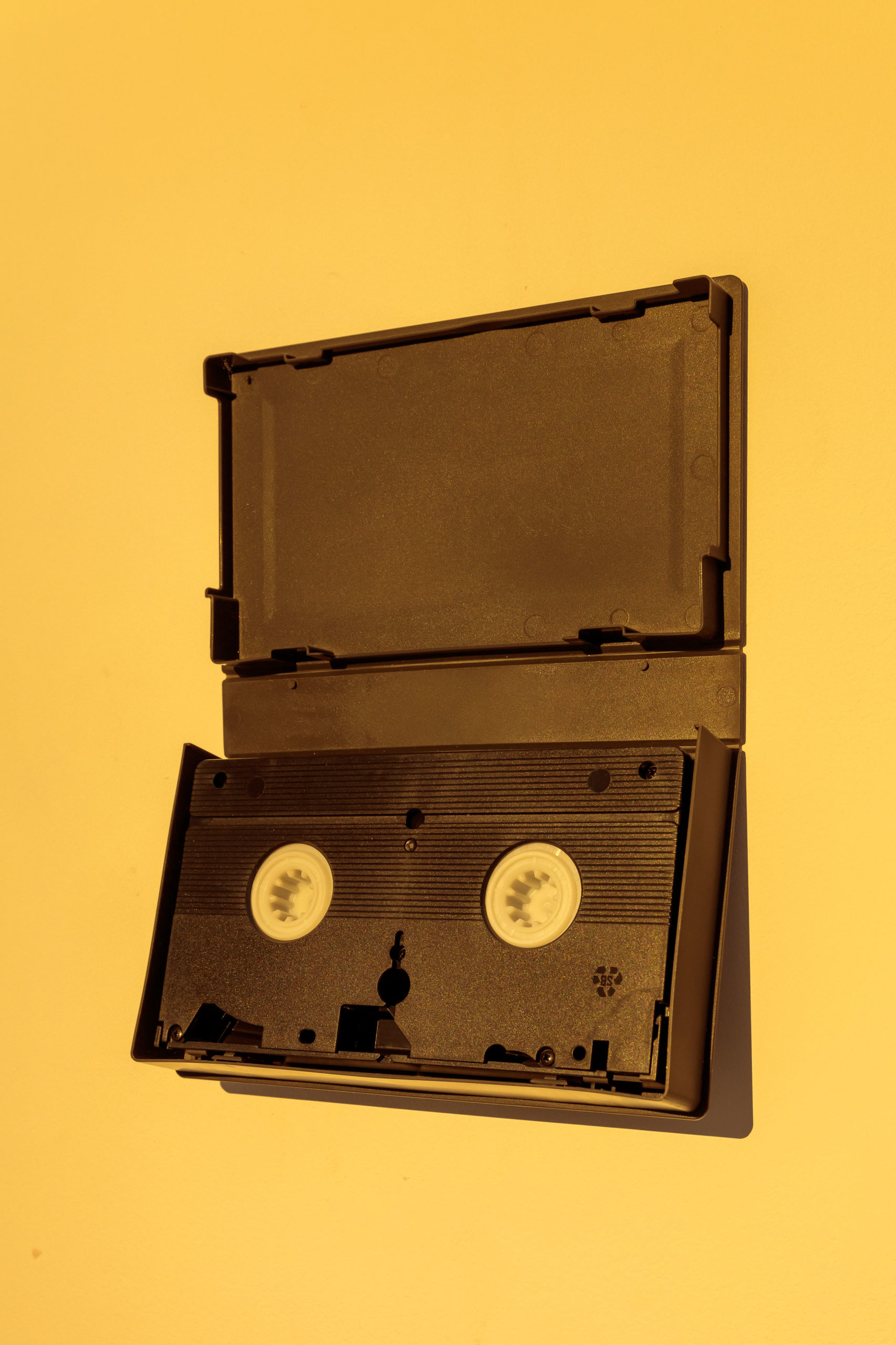 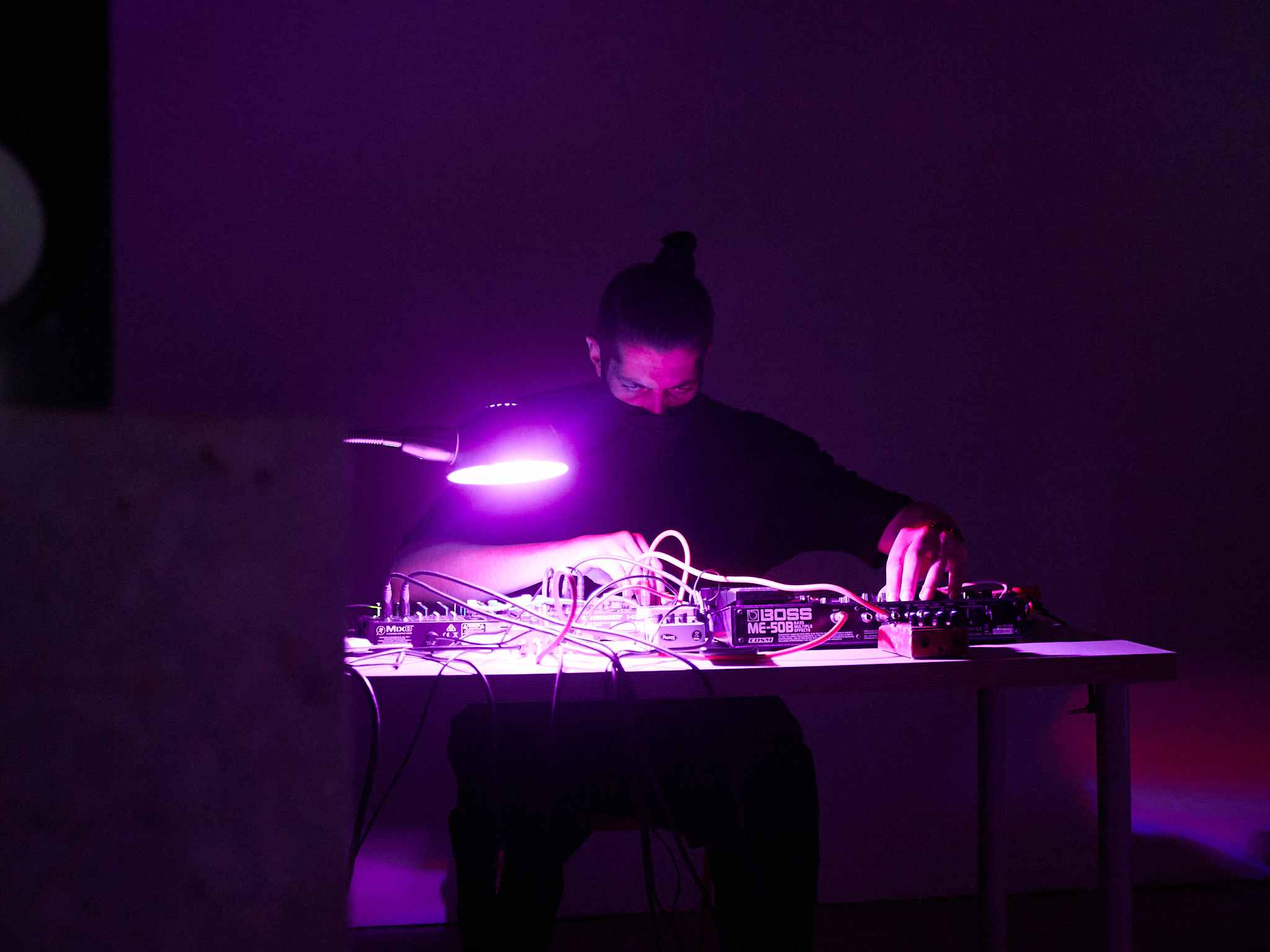 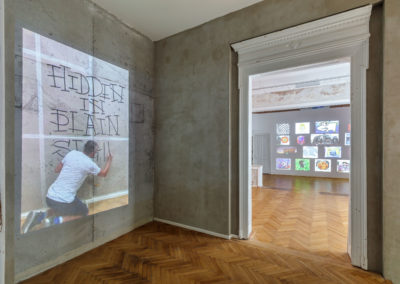 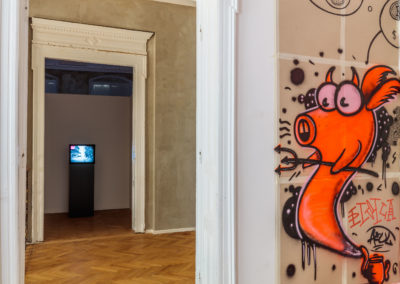 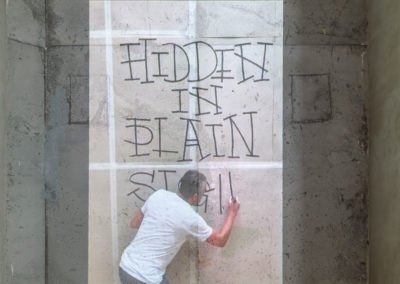 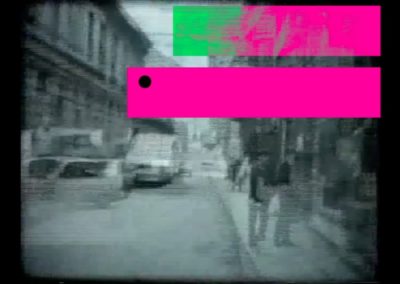 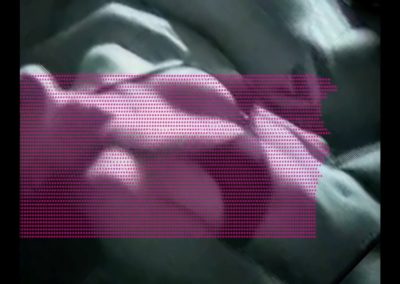 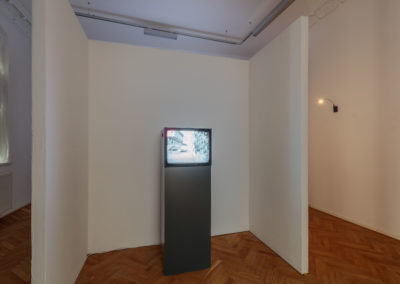 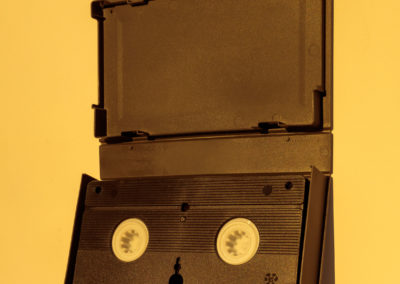 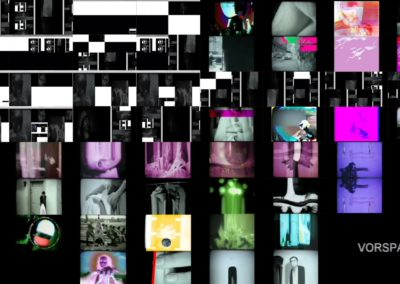 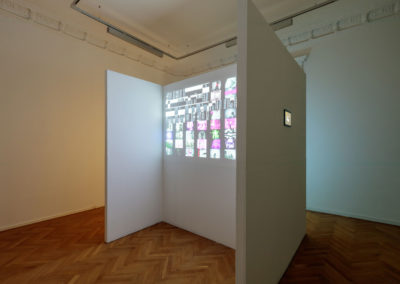 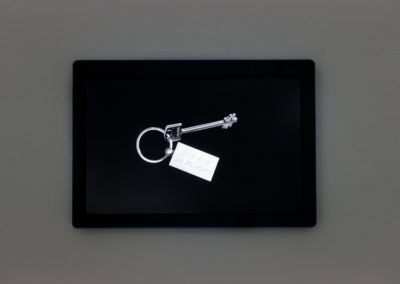 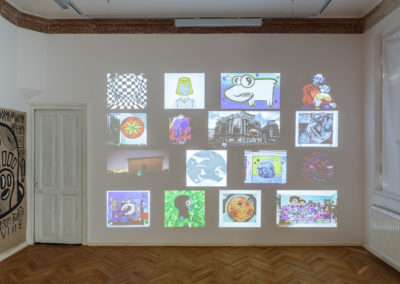 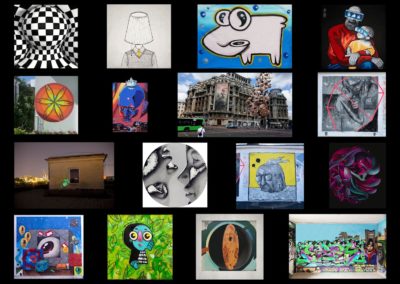 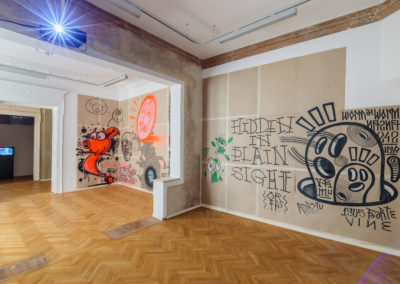 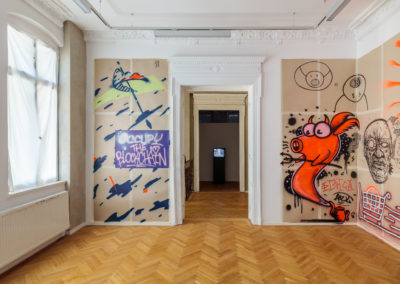 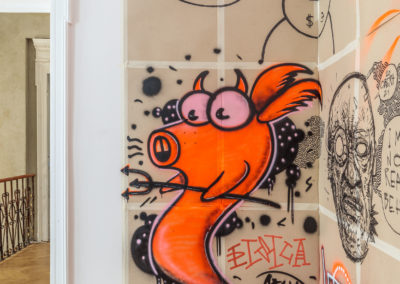 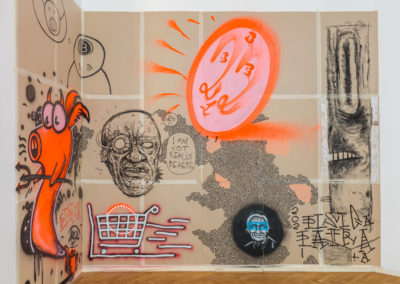 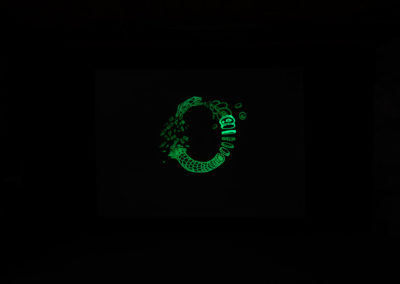 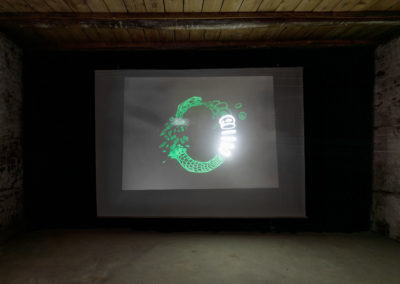 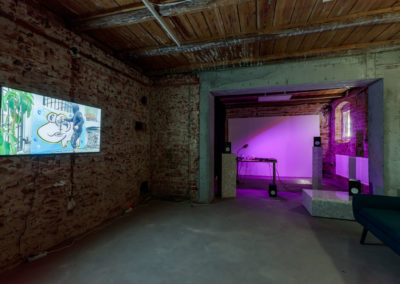